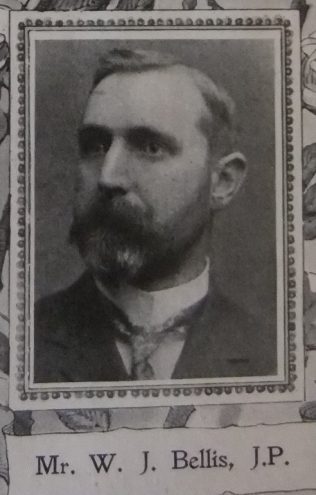 The Circuit Steward of Liverpool II., Mr. W.J. Bellis, J.P., comes of good Primitive Methodist parentage, and his father is still one of the pillars of the Brook Society. Class leader, Society Steward, and Local Preacher, he has for twenty-two years or more than half his life time been School Superintendent. He is Treasurer of the Liverpool Primitive Methodist Council and of the Liverpool Free Church Federation. In the civic and political life of the city Mr. Bellis is a tower of strength. Chairman of the Junior Reform Club he had the honour of addressing meetings during the General Election along with the Prime Minister and other leading statesmen. His appointment as magistrate for the city was received with general favour. He is President of the Fruit Buyers’ Association, which includes merchants from all parts of the country. Of equable temperament, judicial mind, fine courtesy and kindly disposition he should go far in the days to come.

Walter was born in 1864 at Liverpool, Lancashire, to parents Edward and Sarah Ann. Edward was a watch jeweller.

Walter started his working life as a clerk. The 1891 census return gives his occupation as fruit salesman. In 1901 he is described as a fruit merchant.