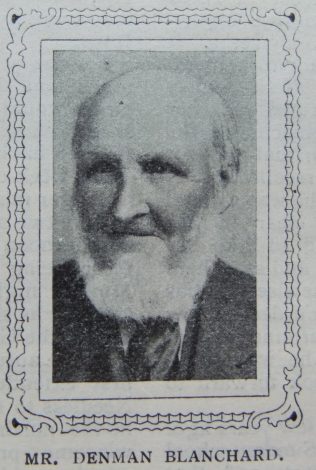 Although Mr. Blanchard is 72 years of age, and is sober and thoughtful becoming his years and responsible position, he is possessed of a bright spirit on account of which he is beloved by young men and maidens, and even the most juvenile members of our Church and congregation.

He entered the spiritual kingdom about 46 years ago, and Jesus Christ is indeed King in his nature, home and business. This fact doubtless accounts for his devotion to and success in the somewhat numerous offices in our Church which he has filled for 30 years.

While he does well in all offices, for none is he better fitted than for Class Leading. He seems to possess almost every gift and grace fitting him for leading the flock of God into safe and pleasant places.

He has a winsome face, which counts for much amongst human kind. He is a man of sterling character and for many years amongst all classes, has borne an unblemished reputation. He is deeply spiritual, and has the aptitude of leading his members to be much like himself in this respect. His nature is very sympathetic, and amidst the suffering and sorrow of his members this is of great service. He has more than the average knowledge of the Bible, and for exhortation, rebuke, or encouragement this proves valuable. As choirmaster of his Church for many years he has gained considerable knowledge of music, and has a pleasant voice; and this, together with his sound judgement enables him to inspire his members in the delightful service of spiritual song. His nature is generous and his financial contributions to his class mark him out as a fine example to his members in this respect.

For many years he has been greatly assisted by his devoted wife, who is equal to her husband in intelligence, and true Christian character and usefulness.

We hope for this useful and happy couple a beautiful eventide and a glorious eternity.

The 1900 Kelly’s for Lincolnshire describes Denman as a grocer and draper at East Halton.