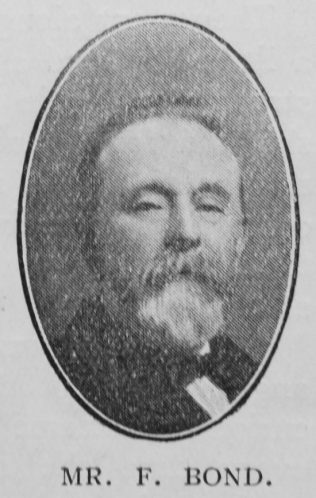 On November 20th, 1912, Mr. Frederick Bond, of Burton-on-Trent, finished his earthly career in the sixty-first year of his age. Born at Eynsham, in Oxfordshire, as a boy he showed no particular inclination for religion, but, being apprenticed on the Berkshire side of the Thames, he was brought under the influence of Primitive Methodism, with the result that he gave himself whole-heartedly to God, and joined the Longworth Church in the Faringdon Circuit.

At the age of seventeen his name appeared on the local preachers’ plan, and it continued there for forty-three years. Removing to Burton-on-Trent, he established a business as a carriage builder, and at once identified himself with our people, first at Queen Street, and in later years at Mosley Street. His brethren showed their confidence in him by electing him on two or three occasions as representative to the District Synods.

During his illness, which continued several months, he was graciously sustained in spirit, by the God he had served so zealously, and died in full assurance.

Frederick was born in early 1852 at Eynsham, Oxfordshire, to parents Matthew Bond, a paper maker (1861), and Jane Barrett.

He married Rhoda Dobson (1856-??) in the spring of 1873 in the Farringdon Registration District, Berkshire. Census returns identify eleven of thirteen children.

Frederick died on 20 November 1912 at Burton on Trent, Staffordshire.