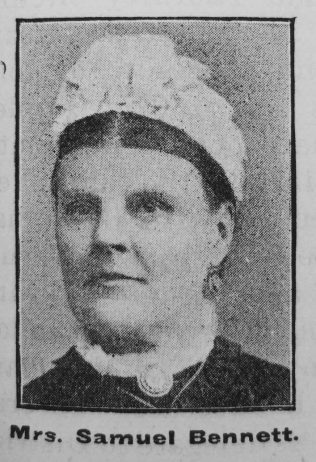 Transcription of Obituary in the Primitive Methodist Magazine by Gervase Hall

The Coalville Society has sustained a great loss in the death of Leah, the beloved and devoted wife of Mr. Samuel Bennett, who was one of its oldest members, and an active and diligent worker in various departments of Church work. She came of an old Primitive Methodist family; her father, Thomas Rushton, having been the means of helping to introduce Primitive Methodism into Wardley Lane, Manchester, by opening his house for preaching services on his removal there from Walkden. For fifty-four years our departed sister was a consistent member of the Connexion, having received her first class ticket from the Rev. Robert Hill, of the Manchester third circuit, being at that time a member of the society at Walkden, from which she originally came. On her marriage she removed to Leicester, where for some years she and her husband were connected with Curzon Street Society, until they removed to Coalville in the year 1874, where she died on Tuesday morning, February 25th, 1902, after a long and painful illness, endured with exemplary patience and resignation.

She was interred at Coalville cemetery on Friday afternoon, the 28th.

Mrs. Bennett was a woman of deep piety, and a quiet but devoted worker in the cause of Christ – being ever ready, as far as she could by her liberality, her hospitality, and her skilful hands, to help on in any way the Saviour’s kingdom.

Her friends knew her to be a Christian by the life she lived and the influence she exerted upon them.

Many testimonies have been given as to the help and inspiration she has afforded them in their spiritual life and in their work for the Master. She was a devoted wife and a kind mother. She looked well to the ways of her household, and her industry was apparent to all. During the latter years of her life, her chief place was at home, her illness often preventing her from attending the house of prayer, for which she had a great regard. She was very anxious to live to see a new sanctuary at Coalville, but has been called to worship in the heavenly temple. Her confidence was strong in Christ, and she had no fear of death, but passed into the presence of the King with a smile upon her countenance. She leaves a sorrowing husband, daughter and son to mourn her loss, but not as over one that had no hope, but only as for a loved one gone a little while before.

Leah was baptised on 15 September 1833 at Ringley, Lancashire. Her parents, Thomas Ruston, a collier, and Ellen, were living at Worsley, Lancashire,

The 1901 census identified that Leah had become deaf.