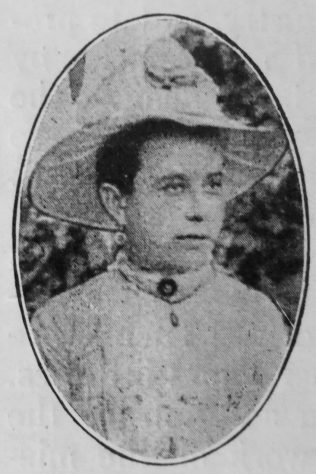 Harriet Blenkin, the beloved wife of the Rev. Stephenson Blenkin, entered into rest at Abergavenny on January 25th, 1908. Her affliction was long and painful, but was most courageously and patiently borne. Though her malady was of a most insidious nature, it was hoped she might ultimately recover. With this end in view, she spent several months in the home of a specialist, but without avail. On her return it soon became evident her days were numbered. During the remaining weeks, all that love could do was done. The best medical aid and most skilful nursing available were requisitioned so that her sufferings might be alleviated and her precious life prolonged. The deep sense of loss sustained was felt. beyond her own home and church, as was evidenced by the number of representatives of the churches of the town—several of whose ministers took sympathetic part in the funeral service.

Her early days were spent in Bognor, Sussex. Here, along with her brother and other friends, she became identified with our church—having, along with her relatives, come from the Wesleyan Church. She threw herself whole-heartedly into the work, assisting at the harmonium, teaching in the Sunday School, and practising systematic and proportionate giving which gave quite a lit to our feeble cause. Here she met her future husband, and they became united in marriage in 1882. Henceforth, she joyfully shared in all the toils inseparably associated with the itinerant ministry. This covered much more than the common area—embracing, as it did, England, Scotland, Wales, and Fernando Po. But however distant the sphere or hard the soil, she devoted herself ungrudgingly and without murmuring, to the work for whose interests she had given her life. Wherever her quiet ministry was exercised she was not only respected, but loved. Notably was this the case in Fernando Po. Rev. W.N. Barleycorn says of her: “I am sorry to hear the sad news of Mrs. Blenkin. Poor, dear, quiet and kind soul, so calm and peaceful, my thoughts turn to the time I spent with them at San Carlos.”

The term at San Carlos was a period of transition. The mission had recently been removed some miles nearer the sea, in the interests of the cocoa industry, and to provide work for the converted natives who, by the heathen chiefs, had been denied the usual privileges of the great forest—because of their adhesion to the Christian faith. Several of the occasional workers were purely heathen. There was much felling of trees and many accidents, which involved considerable additional medical work. Then there were sewing lessons and other domestic duties. All this, of course, was in addition to the educational and spiritual work of the mission. Truly in all such work, she was her husband’s right hand. The Bubi women found in her a real friend, and she was held in high esteem by the women of Santa Isabel.

As one, part of whose labours in that field synchronised with that of herself and husband, I pay this small tribute to her memory with prayers and sympathy for the bereaved husband in his solitude and affliction.

Harriet was born in 1852 at Bognor Regis, Sussex, to parents Thomas, a builder, and Julia.

She married Stephenson Blenkin (1854-1939) in the summer of 1882 in the Kensington Registration District, London.

Harriet died on 25 January 1908 at Abergavenny.