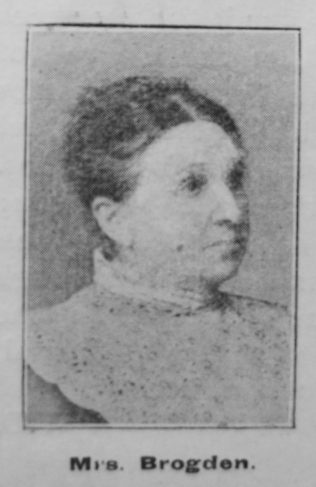 Transcription of Obituary in the Primitive Methodist Magazine by W.D.

On December 4th, 1902, Mrs. Brogden entered into rest. Through her death the Belle Vue Church, Leeds, sustained a great loss. She was one of our oldest members and had an exceptional knowledge of our Church in the earlier years of its history, having been personally acquainted with its founders.

She was born September 25th, 1829, and was blest with pious parents. Her father’s name, Mr. John Reynard, stands intimately associated with the history of Primitive Methodism in Leeds. Clowes visited Leeds in November, 1819; his ministry was mighty and soon a society was formed, and on Tuesday, May 16th, 1820, Mr. Reynard joined our people, though he had for five years been in the fellowship with the Wesleyan community. He was soon called to take the work of a local preacher, which position he filled with much acceptance and great usefulness for thirty-four years. The Rev. John Garner, after having laboured with him many years, said: “Few characters manifested a greater fear of God or a greater concern to spend his life in doing good.” The Rev. Charles Smith, who wrote his memoir for The Primitive Methodist Magazine in the year 1855, says: “He was as lovely a specimen of sanctified humanity as ever we were acquainted with.” His home was visited by many of the eminent ministers of these early years. In these surroundings the subject of this sketch was reared. She was educated at Braham Boarding School, near Leeds. All who knew Mrs. Brogden admired her beautiful character, in which there was so much real, though quiet spirituality and marked refinement. For many years she was a most successful Sunday school teacher, both at Quarry Hill and Belle Vue, and also a class leader for over 10 years.

In 1852 she married Mr. Alexander Brogden, who was an earnest worker in our Church and for many years superintendent of our Quarry Hill Sunday School.

Their home was a very happy one, influenced by culture and piety. During the last few years of her life, through failing health, she was not able to attend the services regularly, but her interest in the Church of which she had such long and happy memories never waned. One of her most beautiful characteristics was her sympathy for the poor. I never visited her without her enquiring most kindly after some of the obscure ones.

The end came somewhat suddenly through an attack of acute bronchitis, and on the date named above she ceased to be mortal, and entered into the fulness of life.

Sarah was baptised on 9 December 1829 at St. Peter, Leeds, Yorkshire. Her parents were John, a bookbinder, and Ann.

After the death of Alexander, Sarah continued the family bookbinding business.