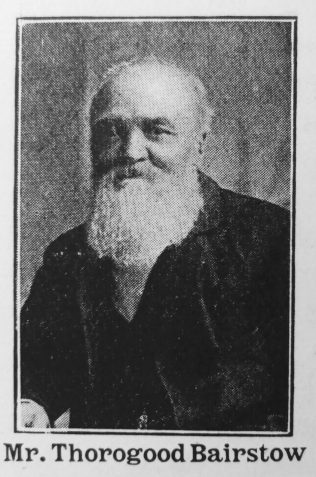 Transcription of Obituary In the Primitive Methodist Magazine by H.J. Taylor

In the removal of Thorogood Bairstow, at the age of seventy-three, the Derby Road Church has lost one of its most striking personalities.

He verily lived a life that was all his own, and a life withal well worth possessing. He was, as he often said like himself. He had inherited a highly nervous, sensitive, responsible disposition. He was like a photographer’s plate, he readily took on what was held before him, but, like the early plates, what he took on he easily, if he desired, washed off. His nature, far more than the ordinary, was open to the influences around. His senses were alert; he felt things as well as saw them. This was true of both his intellectual and his emotional nature. His mind was, in depth and range and power and thought, far above the ordinary. He would have excelled in intellectual pursuits if early trained, but his mind was from early life primarily occupied with religious themes, and historical theology was his pet study. He read much, and thought more, and was, all things considered, wondrously alert and responsive to new ideas. Considering the men under whose ministry he grew up, and the fixed belief of his early years, his openness and advancement of mind was quite astonishing. He knew modern views of Biblical interpretation. He had much sympathy with them, and he outgrew many of his early beliefs, and while ever ready to defend positions he took up, yet he was charmingly generous towards those whose views were advanced. But in some respects his views were more advanced than the most advanced leaders of modern thought. It was admirable to find an old man giving hospitality to the latest views of men, and do it, not because he had not power to think, but generally because in these paths he had himself gone on before. But his emotional nature was, if possible, still more alert. Being a convinced Christian, believing in God, and the Christian religion, as firmly as he believed in his own existence, he gave himself up to God and religion without reserve. He was indeed an out-and-out Christian. A man with more settled views in the goodness and wisdom and sovereignty of Jesus Christ, it would be difficult to find, and his whole nature was yielded up to his views. How he loved the best things. Prayer! When ill health made it impossible for him to attend public worship the minister and a few favoured others knew that he was at home devoutly praying for the success of the service. When he attended the whole place seemed more prayerful by his very presence. It was a distinct gain to have his attentive ear and sympathetic and audible assent. How he loved the House of God! It was to him the dearest place on earth, because here he had definitely met with God. How he loved the congregation! “I don’t think I have an enemy at Derby Road,” he said to the minister a few days ago. “I am quite sure,” was the reply, “that you have not one;” and “I am quite sure.” he added, “quite sure, that I love them all.” The minister of the church has lost one of his chief supporters, one who held up his hands, as the hands of Moses were held up, And the young people have lost one of the grand old men who loved to see them young and happy, and who every day prayed specially for their salvation. There is no need to say that he was in his day an active member of the church. In the town of Halifax he filled various offices of the church, and was in great demand as a local preacher. He taught in the school, and preached in the circuit, until a few years ago. But to those who have only known his latter years, he will be remembered not by what he did, but by what he was. He was a Christian, a Christ man, full of the grace of the Holy Ghost; humble to a fault, frank to a fault; loyal as a friend, loving and tender as a husband and a father, and cheerful and hopeful of the world, the church, and the future. He believed so fully in God that he had no anxiety about his own, or the world’s future. And how beautifully he closed. “ You are not tip-top,” the writer said to him a few days before he died, and he seemed very ill and weak. “ You are not tip-top.” “Yes, I am,” he said, “tip-top in every sense of the word.” It was quite characteristic. He wanted to go. His treasurer was in heaven, and if in the Kingdom that is above chief places are given to those most loyal to Christ, our departed friend has gone to a chief place.

Thorogood was born on 5 December 1826 at Halifax to parents Daniel Bairstow, a weaver, and Sophia Swift. He was baptised on 15 March 1827 at the New Connexion Methodist Chapel, Halifax.

Thorogood died on 22 May 1900 at Southport, Lancashire.