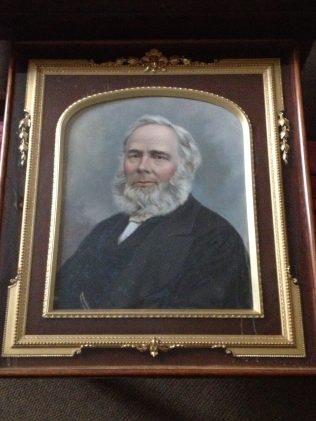 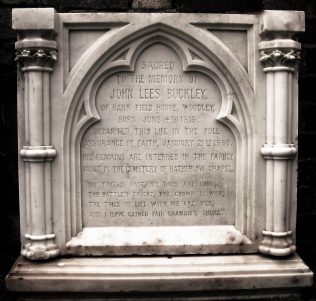 The finding of this portrait of Mr John Lees Buckley at the Englesea Brook Museum store prompted a search to find who he was and why he might have such an exquisite portrait. It seems that John Lees Buckley was somewhat of a saviour for Primitive Methodism in Woodley in the borough of Stockport. Mr John Lees Buckley joined the ranks of Woodley Methodist Church around 1849 and strengthened the church greatly. According to Kendall, ‘Primitive Methodism in Woodley and the district owes much, especially on the material side, to the beneficence and steady connexional attachment of John Lees Buckley and his family.’ [1] John Lees Buckley was extremely active in the church being the Sunday School superintendent, a local preacher, an active member of various district and connexional committees and was a patron of the Manchester Institute. He died at the age of 65 on 21st January 1880. [2]

The following is from an article in the Stockport Express from 2005 which details how the original building of the Woodley Primitive Methodist School was due to be demolished:

‘Woodley Methodist Church Hall in Chapel Street, which has stood at the heart of the community for the past 145 years, is set to be pulled down in the next few weeks to make way for more modern accommodation on the site.

The Woodley Primitive Methodist School, as it was then known, was built at a cost of £550 and was opened in April 1861. The foundation stone was laid by John Lees Buckley, a local mill owner. The building went up alongside the previous church which was built in 1835, and now the site of the present church.’[3]

Despite this Woodley Methodist Church is still open and extremely active in the community according to their website. [4]

It was not just the man in the portrait who sparked an interest but the signature of the portrait painter or photographer. The portrait is signed ‘Lafosse 1882’. After some research it is believed that this is one A. F. Lafosse who was a photographer working from his studio in Allens Buildings, 32 Victoria Street, Manchester around this time. [5] Lafosse also appears in the catalogue records for Exhibitions of the Royal Photographic Society 1870 – 1915. [6] Some of his photographs appear in the collections catalogue of the Manchester Art Gallery. [7]

Can you tell us anymore about John Lees Buckley or A. F. Lafosse?