a Woman Worth Remembering 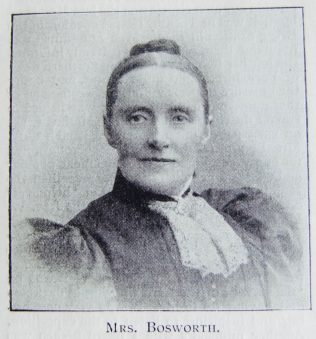 Transcription of Sketch In the Primitive Methodist Magazine by Thomas Jackson

PRIMITIVE METHODISM has supplied in the past, and still provides, a useful sphere for the exercise of the gifts and graces of the godly women who are among the fruits of its evangelistic ministry. If in the ranks of our ministry to-day there is not to be found one of such women, it by no means follows that our sisters are excluded from the ministry of the Word. There are not a few noble women who are doing most effectively the work of evangelists, faithfully discharging their duties as local preachers, and in various ways promoting the interests of our Church and the Kingdom of Jesus Christ.

One of these devoted sisters has recently passed away from the activities of Christly ministry on earth to the perpetual and perfected service of the saints in heaven. At the comparative early age of 54 years Mrs. Bosworth, wife of Mr. Charles J. Bosworth, of Mile End, London, after months of pain and suffering, borne with most exemplary patience and cheerful contentment, ‘fell on sleep’ July 12th last.

Like many others whose lives and labours have adorned and enriched the Church and society, Mrs. Bosworth owed much to the environment of her early life. Her parents were pious and devoted Primitive Methodists, and her home favourable to her spiritual interests. Very early in life she was brought in contact with many of our devoted but now glorified ministers, who found a hospitable welcome in the home of her parents. The spiritual conversation, the earnest and devout exercises at family worship of these godly men made a deep and favourable impression upon her mind and heart. She was also led early to the Sunday School at Portland Place, Lincoln, and there at the age of 12 years she experienced a change of heart, and consecrated herself to the Saviour. At the age of 14 years she became a Sunday school teacher and an active and successful worker. She was of studious habits, conscientious in the discharge of all her engagements, specially attentive to the means of grace, entered most heartily into special missions and revival services, and found her happiest moments with penitents when pointing them to the ‘Lamb of God.’

When the call first came to her to engage in public work she shrank from it. She felt her insufficiency for a work so high and holy as that of preaching the Gospel, and for a time she refrained from attempting it, but subsequent calls were so clear and urgent that she felt it would be wrong not to obey. She commenced her work of speaking and singing the Gospel of Jesus, and at the close of the first service she conducted several souls were converted to God. For more than twenty years she gave most readily all the time she could possibly spare from her family duties to the work of an evangelist. Though not one of the strongest physically, yet she was enabled during twenty years to devote on an average twenty-six weeks per year to special missions and revival services.

As the success of her efforts in leading souls to Christ became known in the Connexion, the invitations to conduct evangelistic missions, increased, until many such invitations had to be refused. Her methods in conducting revival services had nothing of the sensational element about them; she had no sympathy with superficial sentimentality. She believed in the message she had to deliver. She spoke from the heart to the heart. All things were done ‘by prayer and supplication,’ whether in the service she was conducting, in the house where she was the guest, or in preparation for her work. She was a woman of prayer, and the sincerity of her piety was apparent to all who came in contact with her.

It will not occasion surprise to find that the labours of our sister were invariably attended with large outpouring of spiritual blessing. In one circuit, at the close of a 12 days mission, 60 adults and 50 scholars presented themselves for admission to the Church as the result of her work. On the closing Sunday of a week’s mission in connection with a Metropolitan circuit the minister welcomed 31 converts into the fellowship of the Church. During one of her missions in Lancashire the following were reported as the results; converted males over 14 years of age, 48; males under 14 years of age, 36; females over 14 years of age, 74; females under 14 years of age, 37; total 195. The careful record that our sister kept of the names and addresses of those converted under her ministry shows that many hundreds were led to Christ by her earnest addresses and singing. Her concern for her converts did not cease when her missions closed. She adopted the plan of writing to them, giving such counsel, advice and encouragement as she seemed suitable, and the letters she received in return show not only how her labours were appreciated, but how abiding and substantial were the fruits.

She gave most sympathetic attention to our Sunday school scholars whenever she conducted missions. The Sunday school associations connected with her own conversion seem to have influenced her very much in this respect. Her labours were not restricted in their success to the young. Men who are filling honourable positions in our church to-day were, prior to their conversion under her ministry, living most abandoned and vicious lives. One of these, who is now creditably filling the office of local preacher, speaking of his life prior to conversion says, ‘I have been a wretch both to myself and family. My dear little children would run out of the house when they saw me coming home on Saturday. The last day before my conversion I drank nearly one quart of whisky, broke up my home, and beat my poor wife, and should have drowned myself but was prevented.’

In one circuit a number of gamblers and pigeon-players were converted, and became members of the Church. Her gentle, unobtrusive manner told effectively upon the rough and hardened sinner, as well as upon the respectable youths and maidens of our congregations. Her supreme aim in all her work was to win souls to and for Christ. As one of our ex-Presidents of Conference in writing to the now bereaved husband states, ‘Your now sainted wife used all her gifts, if ever woman did, in the service of the Master.’ She laboured long and well, but her labour came to an end. The last call was to the higher service of which the service here had been the preparation. She was ready to respond to it, for she had been patiently waiting for it, and when the shadows of life’s evening closed around her, she sweetly and calmly whispered ‘going home,’ and the wise winner of souls, the earnest Christian toiler, the devoted wife and mother was not, for the angels had taken her to be for ever with her Lord. We cannot, if we would, forget such saintly sisters given to our Church and linked to our friendships. They are worth remembering and ‘shall be had in everlasting remembrance.’

Susannah was born in 1845 at Lincoln, Lincolnshire, to parents William and Ellen. William was a tailor.