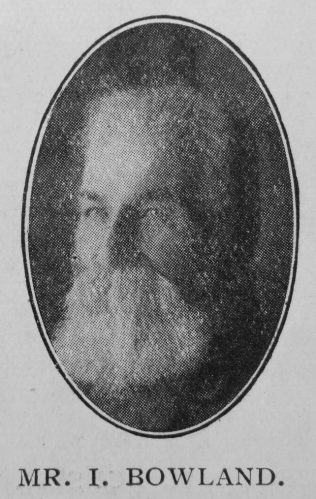 Transcription of obituary published in the Primitive Methodist Magazine by A.J.B.

At Riccall (Selby Circuit) on October 6th, there passed to the homeland, at the age of seventy-four, Mr. Isaac Bowland. Born at Oulston, near Easingwold, converted in our chapel at Huby at the age of sixteen, his name soon after appeared on the circuit plan. For nearly sixty years he was an earnest and acceptable local preacher. The journeys in those days were long and trying, and frequently our departed brother walked over twenty miles on the Sabbath, besides preaching three times.

On removing to York in his early manhood, where the greater part of his life was spent, he allied himself with our Ebenezer Church, of which he afterwards was appointed a trustee. Here he entered heartily into various forms of Christian, activity. He excelled as a class leader, and rendered efficient service amongst the young, in the Sunday School, and for some time was the senior circuit steward of York I. Circuit.

He was intensely loyal to his own Church, was generous, according to his means, both privately and publicly; and was most regular in his attendance at the means of grace. Our brother was a good hearer, deeply spiritual, and sought to carry into his everyday life the principles he held dear.

The last three years of his life he resided at Riccall, where he rendered excellent service to our Church. The end came, after a brief illness, through an acute attack of bronchitis. His remains were interred in Riccall Churchyard on October 9th, Revs. A.J. Bull and W. Herrick and Mr. J. Brough (York) taking the service. The following Sunday afternoon a memorial service was held.

Isaac was born in 1837 at Oulstone, Yorkshire, to parents Isaac Bowman, who worked the land (1841), and Esther Nelson. he was baptised on 6 April 1837 at Coxwold, Yorkshire.