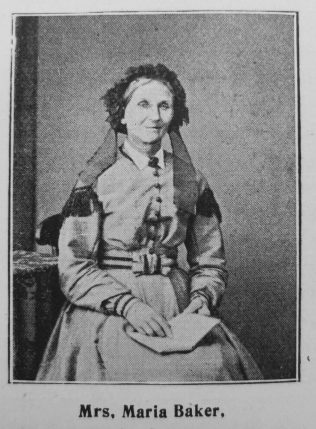 Transcription of Obituary In the Primitive Methodist Magazine by G.C.

Mrs. Maria Baker, of Saltburn-by-the-Sea, and formerly of East Dereham, Norfolk, passed peacefully away to her long desired rest on Christmas Eve, December 24th, 1900. She had reached the ripe age of eighty-seven and had been connected with our Church since her girlhood, having been a member nearly seventy-five years. Many of the old worthies of our Church she knew well, and delighted to repeat their sayings, and describe their methods. Her face was transfigured as she told of the persecutions the preachers suffered, and the power with which they preached the Gospel. She came of humble but honourable ancestry, her predecessors having served for nearly three hundred years on one estate. After her marriage she and her husband had to work hard and long in agricultural labour, and for very small wages. But to their credit, be it said, with industry and thrift they brought up a large family, teaching them by example and precept the dignity of labour. Mrs. Baker was left a widow thirty years ago, but the last eighteen years of her life were spent in comfortable retirement with her daughter, Mrs. Stone. The Bible was her daily companion, and when sight failed her, portions were read to her by her grandchildren, who will ever love and revere her memory. In the home she was a guardian angel, a wise counsellor, with a heart full of sympathy in sickness or trouble. For many years she worked in various ways for the Church, and was ever thankful in declining years when she could do something for the cause. The writer often found it a means of grace to talk with her and witness her strong faith in God.

As the end drew near she called the family around her for the last “Good-bye”: and her whispered words of love and trust will remain a sacred memory to those who loved her as a sainted mother. On December 27th her remains were conveyed to our chapel. Special hymns were sung by the choir, and a very impressive service was conducted by the Rev. G. Whitbread, Wesleyan minister, after which the remains of our dear friend were borne by the Church officials to their last resting-place in the new cemetery, followed by many sympathising friends and sorrowing relatives.
“Will once again that angel face shall smile,
Which we have loved long since, and lost awhile.”

Maria was baptised on 14 April 1813 at Burnham, Norfolk. Her parents were William and Mary.