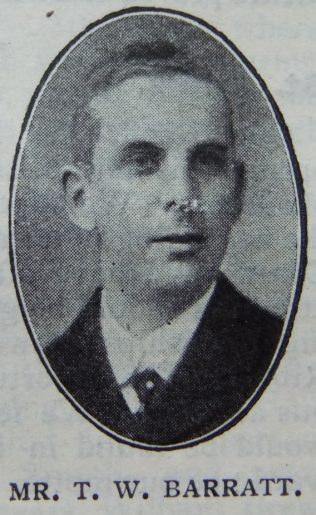 Transcription of obituary in the Christian Messenger

Thomas William Barratt, the son of the late Rev. William M. Barratt, was born at Jersey March 31st, 1871. At sixteen years of age he was put on the plan. At seventeen he was eagerly pursuing studies intended to prepare him for entering the ministry, when a serious illness led his medical attendant to dissuade him from the choice of his heart. Notwithstanding his disappointment, he pursued the work of preaching, and entered heartily into other departments of church life and work. Nine years ago, he married the adopted daughter of Mr. Joshua Holton (of Northampton), and it was characteristic of his love for the Church and Kingdom, that his two children were entered upon the roll from the time of their birth.

For years, outside business hours, his fine physique and splendid health were eagerly and joyously given to Christian work. It seemed impossible to put him in the wrong place; and not only in his own church, but in other Circuits, and nearly all the Free Churches of the district, his varied ministry was eagerly sought after. His love for Jesus grew with the years, and this, combined with quick intelligence, a naturally cheerful temperament, and distinctive personality, made him a general favourite.

For the last six months of his life, he was promoted to the ministry of suffering. After preaching on December 21st, 1907, he was taken ill, and though for weeks we all prayed and believed he would yet be restored, the Master designed the larger life and work for him. These months are illumined with the testimony of a brave, cheerful, triumphant witness to the supreme charm and power of the Gospel.

His repeatedly expressed desire to go home on a Sabbath was granted, and on the morning of June 21st, 1908, he entered the higher service of the King. Amid the sorrowing sympathy of a large gathering of townspeople, he was laid to rest in the Kingsthorpe cemetery on Wedmesday, June 24th. Of him it may truly be said, “His works follow him.” “Being dead, he yet speaketh.”

Thomas was born at St Helier, Jersey, to parents William Miles Barratt and Jemima. William was a PM Minister.

Thomas worked as a clothier’s assistant (1901) in Northampton after his marriage.