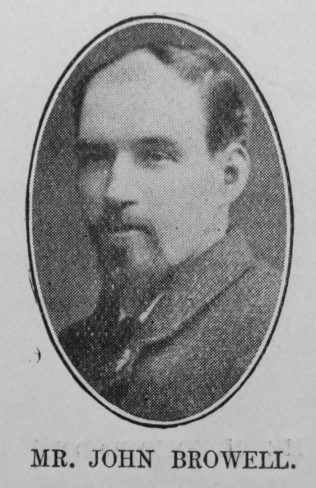 Transcription of Obituary published in the Primitive Methodist Magazine by E. Campbell

The Walbottle Society, in the Lemington-on-Tyne Station, has sustained a great loss in the death of Mr. John Browell. In the years God gave him for service he was the life and soul of the communion. John Browell had gifts that would have made him brilliant had he had the advantage of early training; as it was he gave unstintedly his powers to the church, and adorned for over thirty years the official positions the church honoured him with. He held every office in turn in the society, but his place of honour and distinction was the Sunday School and the class meeting. There was never a dull moment where he was. He was as a king enthroned on anniversary days, and as a man with a message from God, when he entered the class room to dispense comfort, counsel and cheer to God’s children. His books were the Bible and the hymn book.

His thirty years’ service saw at times his powers taxed and strained to the utmost; he used his voice and energy perhaps too well. This with the stress and strain of a miner’s toil led in 1903 to repeated paralytic seizures, which totally incapacitated him for service.

For five years he was confined to his home; and for the last two years of his life he was totally bereft of speech, and could only indicate his wishes by signs, yet this sudden transition from full and buoyant activity to passive suffering was borne with exemplary patience. His faculty of hearing was keen to the end and he responded to all messages of comfort with a smile.

His wife and daughter at home rendered constant and tender service to the sufferer. He fell asleep in Jesus on October 20th, 1908.

A large and representative company assembled in our Walbottle Church where an impressive memorial service was conducted by Mr. E. Redhead and Rev. E. Campbell. His remains were interred in the churchyard at Newburn. He rests from a life of strenuous toil, and shares the reward of those who have done well.

John was born abt1852 at Newburn, Northumberland, to parents John, a coal miner, and Ann.

John earned his living as a coal miner.