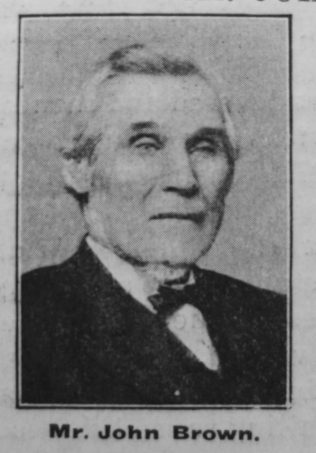 Transcription of Obituary in the Primitive Methodist Magazine by G. Newton

John Brown, of West Lane, in the Keighley II. Circuit, entered into the higher life, after a long and faithful service for the Master in the Church of his choice, on the 15th May, 1903. For fifty-one years he held official position as local preacher. For thirty-two years he was connected with the Sunday School. His class books carry him back for forty years, to the time when the first Trust was formed in connection with the New Town Mission. The trustees appointed him to be treasurer, and this office he held, without a break, until the yearly meeting prior to his death – a period of thirty-three years. He was born at Silsden on October 7th, 1823, but the death of his father when he was of tender years led the family to remove to Farnhill. It was while here, and yet in his youthful days, that he received the first religious impressions. He spoke of it as a home incident that led him first to Jesus. “I suppose I was a bad lad. I remember my mother reaching the strap, the instrument of torture, and to escape it I ran from the house into the street. While there I heard some people singing. I followed the crowd and came to some men and women conducting on open-air meeting. I went with them to the room where a service was held, and that night I was converted.”

His education was, as that of most children of the working class seventy years ago, of a very limited character. He said “I got more learning since I have been converted than before, and that is not much, just enough to do my business in my own way, read the Bible, teach in the school, and keep the trustees’ books.” His mind was keen and retentive; he used his knowledge well and wisely. When twenty-eight years of age we find him at Keighley, connected with Queen Street Church. That year he received a note to accompany Bro. Addyman Smith to his appointments, and since that time he has filled the office of local preacher with great success. For some years before his death he was unable to take circuit work, but the year before he died he asked the Quarterly Meeting to give him a service at Morton Banks so that he could keep his jubilee as a preacher there. As a preacher he was not what is called popular; but he was fearless and true. Not theological, but practical Christianity was the theme of his preaching: the Christ love and Christ life. As a class leader he was faithful. By example and precept he taught his members that if they had received good and were enjoying the religion of the Lord Jesus Christ they ought to pay for it. If they had the advantage of the services of the Sanctuary, they ought to support it. As a Sabbath School teacher he gave himself to serve the school as the teachers willed he should – sometimes as superintendent, at other times as teacher, the lower or higher glass, or doorkeeper; it mattered little to him, his motto was “Anything for Christ and West Lane.” His service as treasurer of the Trust brought him to the fore, giving him a position that was in harmony with his character. While he held this office he saw land bought in New Town, and a wooden building erected; five years after the structure was enlarged, and land bought in West Lane. Ten years after the opening of the mission, the present church was built at a cost of about £4,000; ten years later the building was free from debt Another ten years saw the present suite of rooms for the school at a cost of £3,000. In this rapid and successful advancement our brother played a very prominent part. During the chapel building and debt reduction there were many struggles, many consultations, many nights of thought and prayer. He set in his mind that every bill should be discharged when due. Oft he had to look into an empty bag, but light came, and with the coming light, the bills were met.

The latter years of his life were somewhat marred by affliction and loss of memory. He felt the death of his son, Jesse, about a year before his own, to be a very keen blow. He would often, when referring to it say, “I have lost my right hand, my memory too.” To the very last he maintained his love for the house of God. His end was peace. Of him the Rev. J. Reavely says:- “I had the greatest admiration for him as a grand old Methodist. How he loved his own Church and delighted to make sacrifice for it. When he died many of the needy lost a silent helper. The West Lane Church of Keighley will always be rich in having the name of John Brown in its memory.”

John was baptised on 25 November 1823 at Kildwick, Yorkshire. His parents were James, a comber, and Sarah.

John was married to Mary (b abt1827). Census returns identify three children.