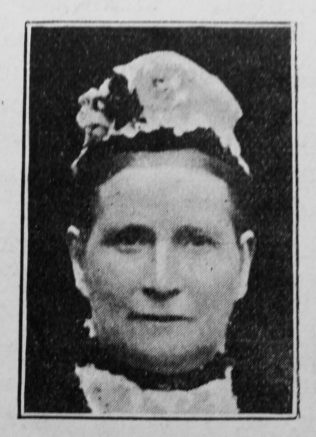 Transcription of Obituary in the Primitive Methodist Magazine by Walter Barnsley

By the death of Mrs. Barnsley, the wife of the Rev. Isaac Barnsley, of Oakham, Primitive Methodism loses one of its most unique personalities. It is given to few to be able to say what

Her father, Rev. William Watts, was one of the early pioneers, and has long since passed to his reward, but her brother, the Rev. Nathaniel Watts, of Aylsham, in Norfolk; her husband, the Rev. Isaac Barnsley, of Oakham; and her only son, the Rev. Walter Barnsley, of Southampton, are all in the active ministry at the time these lines are being penned. It was during the period of her father’s ministry in the Winster Circuit that she made the great decision.

It was about Christmas time, and she was wont to say in after years no singing ever sounded so sweet as that. It must not be thought that because she was associated with our church thus early in its exterior relationships, she was actuated by any formal or perfunctory spirit, in joining it. Those who knew her best know how abhorrent to her, in any shape or form, was mere make-believe. If any trait in her character shone more clearly than another it was her transparent reality and outspokenness, an outspokenness that at times was much to her disadvantage, for it was liable to misunderstanding. As such, however, it was typical of her intense dislike of sham and unreality.

Being brought up in a home of frugality she early learnt to practise economy. These were the times when the salary was a matter of shillings rather than pounds. Facts like these might have deterred a less brave soul from taking the step that linked up her whole future, as far as she could see, with similar circumstances. In 1868 she married a young Primitive Methodist minister, nothing doubting. Many a hearty laugh has gone round the table among the children, when father and mother, in later days, have let slip little details of those earlier struggles.

She took her part in the work of the church, as it came along. For many years it was her custom to collect for the Missionary Fund, and Christian Missions were deeply interesting to her. But it was home she cheered and brightened, and nowhere did her gifts so shine as there. The training of her children was always regarded by her seriously. They were not left to “grow up,” they were “trained up,” and it is the mother’s influence that is so potent here, and especially in a Methodist manse, where the father is oftener out than in. The comfort of the home was not a thing to be lightly regarded either, and the grace of hospitality was ever extended with glad delight to many, especially our own ministers. Nothing was left to chance. Never bodily strong, she would exert her strength to the utmost limit, and sometimes have to pay severely for such indiscretion.

Among the last letters written by her is one to her son, who has experienced many terms in prison for conscience sake. In it she says, “I do not like this sort of thing, but I would not like you to give in now; that would be cowardly. But I hope a way out will soon be found.”

Early in the present year she was smitten down never to rise again from her sick bed. An attack of acute rheumatism developed into fever, and so acted upon a weakened heart that the call came in the early hours of March 5th. During the last days she was perfectly conscious of the approaching end, and frequently prayed aloud. After much suffering, heroically endured, she passed away like a tired child sinking to sleep. The remains were committed to the ground on March 8th, the Rev. G.J. Cooke, of Melton Mowbray, officiating. A service was held in the chapel at Oakham, and was largely attended.

Many are the tokens of love and sympathy that have been received by the family. We sorrow, but not as those having no hope. Till the dawning, farewell.

Priscilla was born in 1840 at Bishops Castle, Shropshire, to parents William Watts, a PM Minister, and Elizabeth Cook.