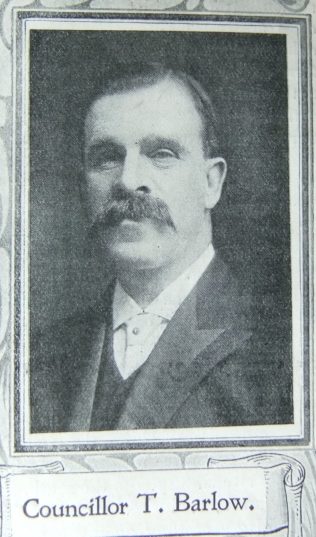 Councillor Thomas Barlow has the gifts and aptitudes that fit a man for leadership. He is a successful businessman, and plays a prominent part in local politics. As a local preacher during the last twenty years Mr. Barlow has been welcomed by all our congregations, and as a class leader, and in the capacity of the superintendent of Mayfield Grove Sabbath School he displays the tact, skill and zeal that characterise him in his commercial life. Our friend is a “liberal soul,” and his generosity is known to all our churches in and around Nottingham, and he is never happier than when he is taking part in a prayer meeting. His appointment to the office of Senior Steward of Nottingham Fourth Station has been abundantly justified by the statesmanlike handling of the affairs of the Circuit.

Mr Barlow takes an active interest in District and Connexional matters, and is likely to figure in a larger sphere.

Thomas was born in 1861 at Owthorpe, Nottinghamshire, to parents Richard and Alice. Richard was a farmer.

Thomas trained as a joiner, but by the time of the 1891 census was a builder.

Thomas married Mary Ann Widdowson (abt1861-1943) in the spring of 1886 in the Bingham Registration District. Census returns identify one child.