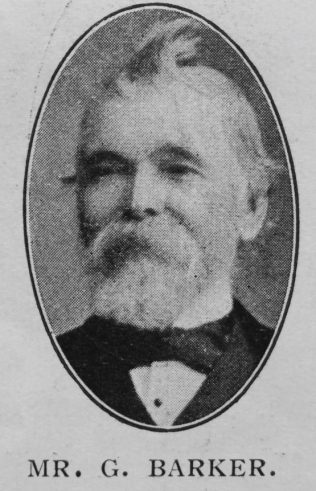 George Barker was a local preacher for over 50 years. He inherited an aptitude for public speech from both his parents, who were both local preachers, and between them gave over 100 years of service to our church. Mr. Barker was born at Northallerton, in the Brompton Station, and was converted when 15 years of age. Before he was 20 his gifts were so obvious that he was placed on the plan as a local preacher. For 51 years he laboured in the Guisborough, Durham, and Spennymoor. Circuits, and in all that period never had occasion to ask for a quarter’s rest until the illness came which brought the end of his career.

He had a good presence, a splendid voice, and an effective utterance. His gifts joined to his unwearying devotion rendered him a living force in pulpit work, and procured a large measure of acceptance and popularity. His theology was of the old Methodist type, and he took little heed of recent developments of thought. Satisfied that his faith included the essentials of the Christian religion, he rested securely in his personal. experience of the saving power of Jesus Christ. His public utterances sprang from his conception of the truth as verified in his own personal religious life. Thus he constantly sounded the note of assurance. There was nothing hesitant or uncertain about his exhortations. He delighted in setting forth the great verities of sin, salvation, and eternal life.

Whilst he held another position in the church (Class Leader), yet his delight and his fitness were both in the work of preaching the Gospel of our Lord and Saviour Jesus Christ.

For four months at the end of his life, he suffered severely from cancer, but in all his sufferings he did not waver in his testimony concerning the salvation in Jesus Christ. Now “he rests from his labours and his works follow him.”

George was born 1839 at Northallerton, Yorkshire, to parents Thomas Barker, who worked the land (1841), and Mary Bowe.

I have not been able to identify when and where George died. Can anyone point me in the right direction?