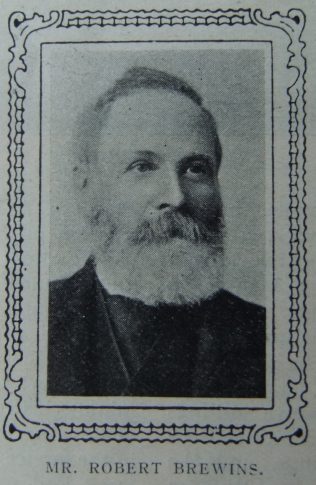 ROBERT BREWINS, senior Society Steward of Selby, is one of the “elect” specially designated “children of God.” His influence is always towards “peace-making,” for, though diligent and devoted to a fault, he possesses none of the spirit and manner that provoke envy and opposition.

Our subject has spent the whole of his seventy years in the neighbourhood of Selby, and his best credential is the universal honour accorded to him. Never possessing great financial resources, he has never failed to meet the true test of liberality used by his Master. His occupation, as a shoemaker and postman combined, has induced that meditation and afforded the sphere necessary for tactful “conversation” preaching and helpful visitation of the sick and dying. His repertory contains many striking incidents that are full of encouragement and inspiration.

Our friend has always been fond of singing, and for many years was choir-master. His love of singing has been a great boon to his office as Society Steward, which he has held for thirty years. During that time his office has never been a sinecure. Band meeting, prayer meeting, and other week-evening services are his special care. For twenty years he has led the Sunday afternoon class on the special requisition of the members. The genius and institutions of Methodism are dear to him, but his veneration of the old paths does not rob him of sympathy with the new. His presence is invariable at the “means” and every undertaking of his Church has his co-operation and support. Maybe, the fire does not burn so rapidly, but it is still bright and luminous, his hand is still on the plough, and his devotion untiring.

Robert was baptised on 19 November 1837 at Rawcliffe By Goole, Yorkshire. His parents, John and Martha, were a Wesleyan family. John was a schoolmaster (1841) and later a confectioner and postmaster (1851).

Robert moved to Selby about 1866 were he associated himself with the Primitive Methodist Church.

As well as serving as society steward for over forty years, he was also a class-leader and occasional preacher.