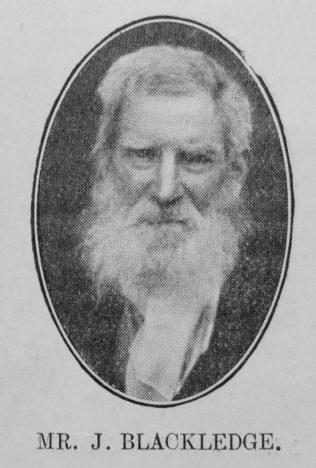 Transcription of obituary published in the Primitive Methodist Magazine by J.S. White

The late Mr. Joseph Blackledge was one of the patriarchs of Primitive Methodism. He was born on May 6th, 1821, in the little hamlet of Wrightington, just one year previous to that in which Thomas Batty began his pioneer work in this locality. Primitive Methodism has probably had an existence in Wrightington for over eighty years, for his grandparents, as well as his parents, were associated with our church there. When our deceased brother was but a boy his parents removed to Chorley, and there the family have resided till the present time. They attached themselves to our people, who then worshipped in the old West Street Chapel, and afterwards in the Cunliffe Street Church.

Fifty-four years ago Joseph Blackledge was converted, and at once became a warmhearted and lively Primitive Methodist. Those were the days of simple fervent evangelism, and consequently our friend was soon numbered amongst the youthful zealots. He delighted in prayer meetings, band meetings, class meetings, open air missions, and temperance work. He was beloved as a class leader, and in that work he took delight for forty years. He made no pretence of scholarship or special pulpit ability, but he did much valuable work as an evangelist in those olden and arduous days.

“Wise, without learning, plain and good,
Whose eye, in age, quick, clear, and keen,
Showed what in youth its glance had been.”

He was one of the original trustees of Cunliffe Street Church, and along with his wife (who completed her earthly pilgrimage twelve months since) laboured long and energetically in aid of the trust fund. During the last twelve years physical infirmities compelled him to relinquish much of his beloved duty, but he continued unto the end a devout God fearing man.

About an hour before his death consciousness returned and early memories revived, after which he relapsed and peacefully entered into the eternal rest.

Joseph worked as a coal miner.

Joseph died in the summer of 1909 at Chorley, Lancashire.