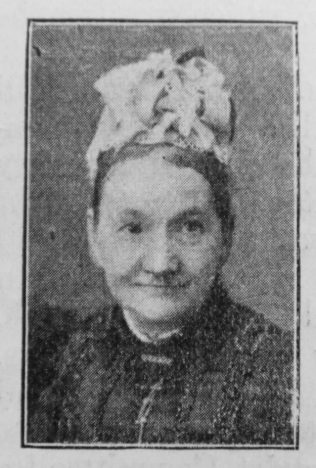 Transcription of Obituary in the Primitive Methodist Magazine by I.L.

Elizabeth Blake, wife of the Rev. Ephraim Blake, was born at East Runton, near Cromer, in the year 1830, and ended her earthly pilgrimage at Great Yarmouth on Sunday January 22nd, 1905. Her parents were members of our Church, her father being some time steward of the Aylsham Circuit, and a local preacher for sixty years. Under such godly and gracious influence she early in life yielded herself to the Divine love, and for over sixty years was a devoted and consistent member of our Zion. At the age of nineteen she became the wife of the Rev. E. Blake and had the exceptional experience of fifty-five years of happy wedded life. She was the mother of thirteen children, nine of whom survive, and all are members of the Church, thus bearing a striking testimony to the character and influence of their departed mother. Her family affairs were well and carefully attended to. The welfare of husband and children was her great delight. Thriftiness and industry were marked features in her character. She was a woman of ardent temperament and exuberant spirits. This quality she maintained to the last. The family life was one of the brightest and happiest it has been our privilege to know. Notwithstanding the pressing claims of domestic duty, Mrs. Blake was until the time of her husband’s superannuation, an active worker in the various departments of our Church life. She was an ardent supporter of all efforts for the material and financial prosperity of the circuits in which her lot was cast. Bazaars, tea meetings, and other methods for raising money for Church purposes found in her a willing and cheerful worker. Such labour had no ill effects upon her spiritual life. She was quite at home in prayer and class meetings.

In revival and evangelistic services she delighted, whilst Sunday School work and catechumen classes shared in her holy toil. Many stories are still told of her earnest efforts for the good of souls. Her life was consecrated to the advancement of the Redeemer’s kingdom, and her visits to the homes of the people were made a means of much blessing. All the difficulties and discouragements of the ministerial life were cheerfully borne and her whole experience was characterised by an unwavering trust in God. Her husband found in her a helpmeet indeed. She shared his joys and sorrows, his victories and defeats. In times of depression she cheered him and in moments of perplexity her counsel was of great value. When Mr. Blake retired from active work in 1889, they came to reside at Great Yarmouth, and associated in membership with the Temple Church. Here by her Christian character and conduct she won the respect of our people. Her end came suddenly. On the afternoon of January 22nd, she wrote her weekly letter to one of her daughters, but ere the letter reached its destination, her spirit had taken its flight and her life on earth was o’er.

May grace be given to the bereaved husband and sorrowing family, that when years are passed they may be reunited with their loved one in heaven.

She was interred in Gorleston Cemetery on January 26th. The Rev. A.E. Calvert conducted the service, assisted by the Revs. W.A. Hammond, F.B. Paston, T.H. Barlow, and Mr. Leach, H.L.P. Devout men carried her to her burial. An impressive memorial service was conducted by the Rev. W.A. Hammond in the Temple, Great Yarmouth, on Sunday evening, January 29th. “To live in the hearts of those we leave behind is not to die.”

Elizabeth’s baptism record identifies that she was born on 15 October 1831, and baptised a day later, at Runton Norfolk. Her parents were Francis Abbs, a farmer, and Elizabeth Hendry.