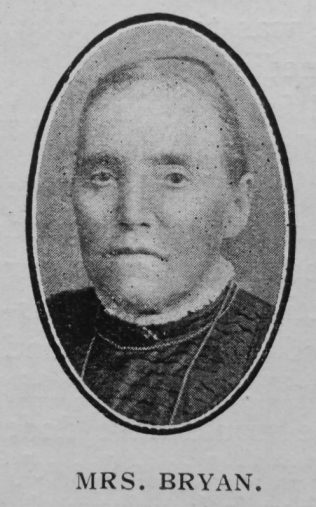 Our Church at Clay Cross has sustained a very severe loss in the death of Mrs. Bryan, Oct. 17th, 1911. Her sweet and lovely character won universal regard and she is mourned by a large circle. She was born at Derby, Nov. 10th, 1837, and was the eldest daughter of Samuel and Charlotte Allard. United in marriage to Thos. M. Bryan, Clay Cross, in 1876, after much deliberation they decided to join the P.M. Church. Mr. Bryan is still our respected Society Steward.

In her personal character Mrs. Bryan was transparent as a sunbeam, apparently incapable of harbouring a wrong motive, or of concealing a thought for sinister purposes. Her deep attachment to the house of God was evidenced by her regular and punctual attendance at the various services and by her zeal and liberality in support of all its institutions. She was a good wife, an affectionate mother, a sincere friend.