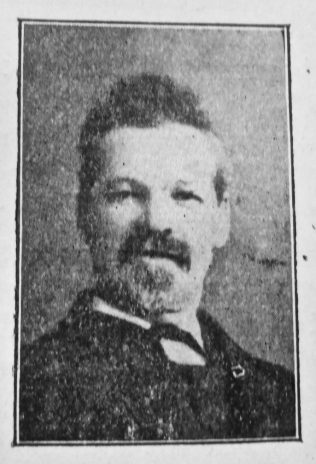 The late Mr. John Burkitt, of the Hull 6th Circuit, has left a life’s story containing many points both of  interest and inspiration. Deprived of parental influence and care in early life, and thrown upon his own resources, it is not surprising that he formed associations and habits not helpful in their character.

Always of a social and generous disposition, fond of song and jest, frank and fearless, he was prominent in the company of good-hearted but foolish fellows who often laughingly drift to the rapids and the rocks of intemperance. When thirty-nine years of age, he was accosted one day in the street by Mr. Henry Webster, who had known him as a youth, and who, linking his arm in his walked down the street with him, reasoning and pleading with him to forsake the path of sinful folly for the way of life. The appeal went home. He saw the error of his ways, and the things that belonged unto his peace, and a few days later made the great surrender and entered upon that life of religious experience and attainment which was perfecting until the day of his translation. With characteristic whole heartedness he threw himself into religious exercises and service. The change was so complete that he seemed to have been transplanted into a new world. Joy and praise rose from his full heart, and burst in unceasing testimony from his lips. The Sunday School and the open air mission found in him an enthusiastic worker.

For over twenty years be rendered useful service as a local preacher. Though not a cultured man he was intelligent, and had a strong sense of the responsibility of the preacher’s vocation. He would warm to the delivery of his message with a homely eloquence which often strongly appealed to his hearers and had a rousing effect. He sometimes rose to passion but never descended to triviality. The office of class leader next engaged his gifts, and in this he was particularly happy; his religious enthusiasm and sincerity communicating themselves like spreading fire to those around him.

Nowhere was the transformation of his life more evident than in his home. His family have grateful memories of the tenderness he lavished upon them. Among his workmates he was held in the highest respect because of his genuine piety and robust manliness. His conversion was for everybody to know. The fire of earnest evangelism burned in his heart and became a living argument of the power of the Gospel of Jesus Christ. A favourite text of his was: “This one thing I know, that whereas I was blind now I see.”

It pleased God to test him, but like Abraham he came out of trial victorious. The sacrificial death of Christ was the rock-on which was built the structure of his Christian life and character. It was the ground in which his soul found sure anchorage, when the storms of life raged around. Where reason might have led him wrong, simple faith in God kept him in the upward, heavenward way.

His interest and energies went out entirely on the religious side of church work. Official courts had no attraction for him at all, but he held the ministry in high esteem, and rejoiced in the spiritual prosperity of Zion.

For two years he suffered greatly and with beautiful Christian faith and resignation watched the gradual approach of the Angel of Death. At 8 o’clock on Sunday evening, July 2nd, 1905, when congregations all around and far and wide were rising from their evening worship, God’s finger touched him, and, freed from the earthly house, his ransomed spirit rose to the building not made with hands, to join in the work and worship of the innumerable multitude who serve Him day and night in His temple. Thus he passed away in the sixty-sixth year of his age, leaving in the memory of his devotion and piety a legacy more valuable than treasured gold. The writer of these few lines is among those who can hardly think of him and his love without tears.

He was of those of whom George Eliot says: “There are natures in which, if they love us, we are conscious of having a sort of baptism and consecration; they bind us over to rectitude and purity by their pure belief about us; and our sins become the worst kind of sacrilege, which tears down the invisible altar of trust.” Now that he is gone, adding his goodness to the unseen side of things, the spiritual world is nearer, more beautiful, more real. We feel as never before that “death” is life and that God is good.

John was born abt 1840 at Kingston upon Hull, Yorkshire, to parents Joseph, a flax dresser, and Jane.

His probate record describes him as a grocer.