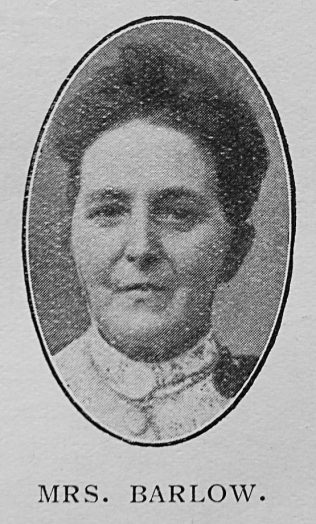 Haslingden Church has suffered a severe loss in the decease of Mrs. John Barlow. Born in Haslingden in 1856 she attended, in early life, Salem (U.M.C.) School and Church, but on uniting in marriage to her late husband, John Barlow, identified herself with Primitive Methodism. Soon after marriage business exigencies necessitated their removal to Preston, and for eighteen years she, with her husband, was associated with our Deepdale Church in that town.

Here our sister did quiet useful service, particularly in the Sunday School. Returning again to her native town she resumed her connection with our Grane Road Church, and faithfully witnessed for the Master until she was called home.

Sister Barlow was one of the quiet good souls who do much with little noise, to sweeten and sanctify the life of a Church. Regular in her attendance at the Public Services and class meeting — unassuming, gentle, and self-sacrificing, she was a choice spirit—one who knew the secret of the Lord — because she feared Him.

The loss of her husband five years ago was a great blow to her. This was succeeded by a long and serious illness of her youngest son, necessitating many long days and weary nights of watching and anxiety. The strain proved too much for the frail body. Heart trouble supervened—and she passed quietly to her rest. She leaves two sorrowing sons and daughters, for whom greatest sympathy is felt.

Our sister was among the devout women to whom the Church owes so much, whose ministry is quiet, unostentatious yet faithfully rendered. The devotion and self-sacrifice of such workers are often little recognised. It is theirs, however, to furnish a large proportion of that unconscious influence which, after all, is the most potent force for righteousness in the world.

Note: Records identify that Mary was born two years prior to the date in the obituary.