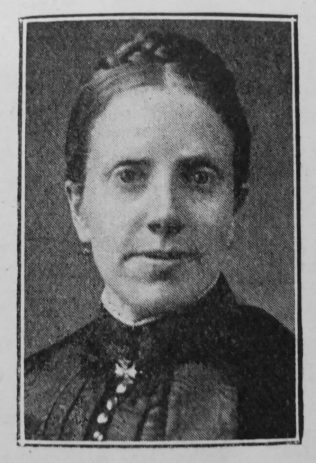 Transcription of Obituary in the Primitive Methodist Magazine by Rawleigh Humphries

Born May, 1856, Rose Bland died Feb. 22nd, 1907. Before she could walk her father went to Australia, leaving her mother, with a family of little children, penniless. At seven Rose learned spinning in the factory so as to help her mother. She attended our Great Horton Sunday School, and was converted when eleven. Often she gathered the young workers around her for a prayer meeting at the dinner hour, and many a loomgate became holy ground. By the influence of Mr. Joseph Wilson she and Ann Haley came upon the plan. Oh, that in this Centenary year more of our women would do the same! Soon afterwards our sister left the mill and entered upon mission work for our people, and many a village chapel had reason to thank God for the labours of this fair-haired, happy-faced little woman. For seventeen years she laboured in connection with the Bradford Town Mission, visiting the cells at the Town Hall, praying, pleading with the young girls to change their life.

Her heart ached when she found eleven and twelve young girls there on a Sunday morning. Into her fifty years she crowded a marvellous amount of work, making, mending, knitting, and trimming hats for poor children. Poor mothers, husbands in prison, knew Rose Bland as a ministering angel. She was tireless in her work for the poor in all winds and weathers. This told upon her weakened frame. She had her aged mother to maintain, and went out visiting the sick and needy when physically unfit.

Her father, returning from Australia, heard her preach in our Low Moor Chapel. He trembled and wept. “I would give anything to be like you, Rose,” he said. He returned to Australia where he died, but never forgot Rose’s prayers. At one of our prayer meetings in. Great Horton Chapel she prayed with such fervour that my companion, an ex-mayor of a cathedral city, wept and declared that he never heard anything like it. She never seemed unhappy – there was no vinegar in her life. Trials she had many, but her Saviour was real to her. How tenderly she regarded her mother who was deaf and ailing. I have often spoken of Rose Bland as “Dinah Morris,” for she was in labours more abundant. Heaven is richer, but Great Horton and Bradford poorer for her death.