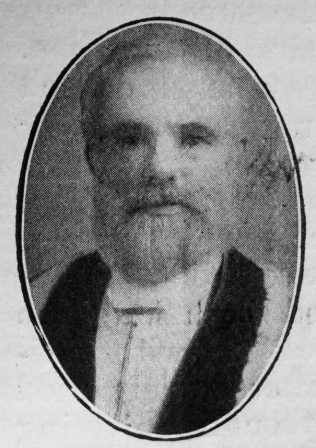 Alderman T.P. Brownhill was born at Tipton, Feb. 8th, 1836, and died April 15th, 1906. His parents were converted and joined our church in 1822. For four years his mother was a regular travelling preacher and a local preacher and class leader for more than thirty years; while his father was a member and local preacher for sixty years. Born in our Church our brother devoted his whole life to its interests. A class leader and local preacher for over forty years he was several times elected a delegate to Conference. A preacher of considerable power his services were constantly and urgently in request for special occasions, and he was very popular on the platform.

For twelve years he served on the Walsall School Board and was the first chairman of the Education Committee when the Act of 1902 came into operation. After being a year on the Town Council he was unanimously elected Mayor, and soon afterwards Alderman, and subsequently a J.P. He was held in the highest esteem even by his opponents, and when elected Mayor, Alderman B. Dean said, “I have known Mr. Brownhill for thirty-three years and have never known him swerve by a hair’s breadth from what he believed to be right.”

As a friend he was thoroughly reliable, as a business man honourable and straightforward, as a Christian worker highly regarded by his brethren, and welcomed by all the societies and congregations where he laboured. To quote the testimony of the Mayor at the time of his death, “his character was as high as human being could attain.” He was a loyal Primitive Methodist, a sturdy nonconformist and a thorough Liberal in politics.

His end came suddenly. On April 14th he went to Llandudno just as he was recovering from an attack of pneumonia, but he was called home on the following morning. For many years to come his name will be held in high honour, and the influence of his noble life will be an inspiration both in municipal and church life.

Theophilus was born on 8 February 1836 at Tipton, Staffordshire, to parents Wiiliam, a blast furnace manager (1851), and Elizabeth Johnson. He was baptised on 20 March 1836 at Dudley.