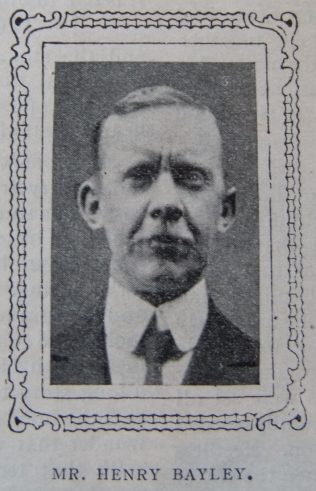 MR. HENRY BAYLEY, who is the Society steward of the Mother Church of the Connexion, was born at Congleton in 1860, near to the far-famed Mow Cop. He was converted under the ministry of the late Rev. J. R. Taylor in 1876. His first impulse to a religious life was received in the Sunday school, and he soon became a school worker, discharging, in turn, the duties of several offices. Immediately after his conversion, he accompanied local preachers to their appointments, and was soon numbered in their ranks. The Rev. Joseph Timmins was the minister who placed his name on the plan. About the year 1884, he removed to Tunstall, and soon engaged heartily in evangelistic work, being often engaged in conducting revival services, in which he witnessed many conversions. He remembers with pleasure that the Rev. R. B. Goodwin began his work as a preacher of the Gospel under his direction, being his assistant “on note” for a time. Fourteen years ago, When the Rev. E. Newsome travelled in Tunstall, he was appointed Society steward, an office in which he has rendered good service. When appointed, the quarterly levy for Tunstall was £26 a quarter, it is now £50, an average of nearly £1 per year per member. The total raisings of this church for society, school and trust are, exclusive of special efforts for reduction of debt and improvements, over £10 per week. This is accomplished by each officer looking well to his own department, and our brother has needed to be alert to have his £50 ready for the quarterly meeting, a feat which only occasionally he fails to perform. Our friend is a Class leader also, and has rendered service on the Town and Council and Burial Board.

They brought up a niece, Bertha Healey Sharp (b1884), as an adopted daughter. Bertha was a potter’s transferrer (1911)