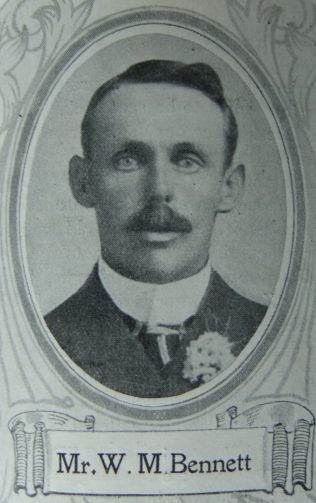 The Chancellor of the Minsterley Circuit is a hardy yeoman of the Shropshire Hills, and comes of a noble ancestry, his father as a local preacher having laboured hard to plant Primitive Methodism in this locality. As a local preacher for thirty-two years, he has always been earnest and acceptable, and has had many special requests for his services. For twenty years he has been the choir leader at Pennerley, and eight years ago was elected Circuit steward.

The circuit chose him as their representative to the first Shrewsbury District Meeting, and his fellow parishioners elected him a member of their first parish council, also as District Councillor, and afterwards appointed him as their overseer.

His tact and geniality have greatly helped him in his dealings with his fellows, whilst his hospitality and liberality have largely helped the church to which he belongs.

William was born on 27 August 1869 to parents Thomas and Margrett. He was baptised on 12 October 1859 at Pennerley in the Minsterley Methodist Circuit by Joseph Hall. Thomas was a miner.

William started his working life as a lead miner and later became a farmer.

William married Matilda Jane Delbridge (1858-1924) in the spring of 1876 in the Clun Registration District. Census returns identify one child.