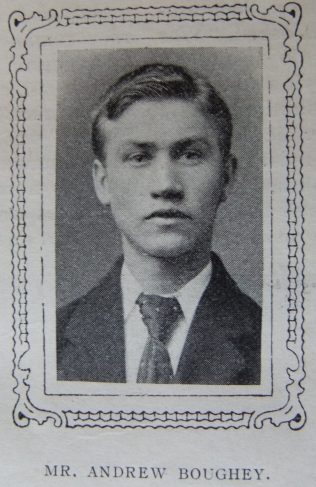 The subject of this sketch was born at Shieldmuir, near to Wishaw. He has been in this district all his life and from a very early- age connected with our church and school. Born of godly parents, both of whom were Primitive Methodists, he was taken to the Sunday school when quite young, and is to-day one of the few in the school who have passed through all its grades to become one of its present officials. He is one of those men who claim to be products of Sabbath school teaching and owes his religious standing to the lessons he received in those early years. For the last fifteen years he has been a teacher, taking a great interest in his scholars, always striving to lead them to Christ. For some considerable time he occupied the position of Secretary.

At the age of thirteen he gave himself to the service of Christ and ever since has been a useful and consistent member of our Church. He is a devoted and loyal Primitive Methodist, and never fails to seize an opportunity when he can show his church to advantage both by his life and work, For the last twelve years he has been Society steward and is zealous in attending to the duties of that office. The interest of the church lies near to his heart, and he is a ready supporter in every undertaking. Quiet and unassuming, he is respected by all who know him. Genial and kind, he makes friends wherever he goes. He loves his church and feels most at home when working in her interests.

Mr. Boughey is still in the prime of life and we pray that many years of useful service may still be his to serve the church he loves so well.

Andrew was born abt 1877 to parents William and Martha. William was an iron worker in 1881.