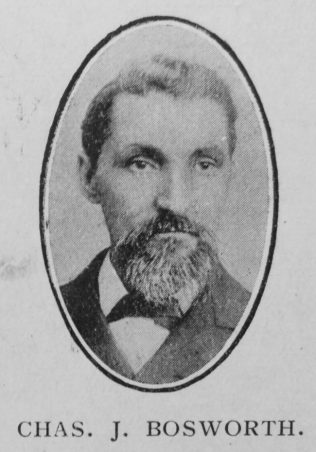 One of a noble band of local preachers to whom Metropolitan Primitive Methodism owes much was the late Mr. Charles J. Bosworth. Born in 1843 at Sawley, near Derby, when a boy he removed to Lincoln, and under the ministrations of our Church was converted to God in his fourteenth year. His exemplary conduct favourably impressed the Circuit officials. He was called to the office of local preacher, and afterwards recommended for the ministry. After entering upon his probation, he had, however, the misfortune to sleep in a damp bed in one of the villages where he was planned, and that occasioned an illness that necessitated his giving up the ministry.

He removed to London some thirty-four years ago and located in they East End, where for more than a quarter of a century he and his devoted wife, who was a most earnest evangelist and soul winner, laboured with great acceptance and success.

In open air work and other forms of aggressive mission work he was deeply interested. As a local preacher he was most studious and careful in preparation, and his services were in great demand by the London Circuits. For a number of years he took an active part in the work at Stepney Green Tabernacle. Soon after the opening of the Whitechapel Mission he associated himself with Mr. Jackson and rendered useful service up to the time of his removal to Southampton seven years ago, where, after much suffering he passed to his eternal rest July 24th.

The interment took place in Ilford Cemetery and was conducted by Mr. Jackson. Many tokens of respect from former colleagues in London work were shown, and deep sympathy expressed for the family.