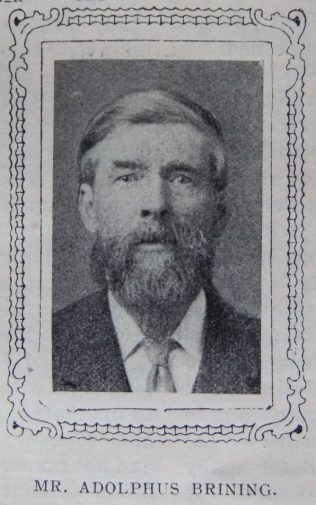 MR. ADOLPHUS BRINING is one of those characters who by quiet patient and devoted services have done much to build up our beloved Church. Born in Leeds in 1840, he was in youth associated with the Church of England, but having relatives connected with our Quarry Hill Church, he was induced, in 1868, to join the Society.  Becoming a prayer leader and a tract distributor, he would distribute about six dozen tracts every Sunday, He also assisted the Bank Society, and when a school-room was built in 1870, became a trustee and transferred his membership to that place. In 1877 Bourne Chapel was erected, and as a trustee he has known something of the struggles and anxieties occasioned by a crushing debt.

For thirty years our brother has been a Class leader at “Bourne,” Leeds First Circuit, and prior to this, he was for two years assistant leader. In 1884, Bourne Church experienced a mighty revival, when some 400 persons were converted. Bro.Brining’s ‘class alone then numbered 170 members, and sometimes as many as 100 were in attendance at once. The class contained several original characters, and many striking testimonies have been heard, and much of the old glory experienced. Mr. Brining still believes in the Class meeting as a means of grace, and thoroughly enjoys one of the old-fashioned order.

For thirty-eight years our brother has been engaged in Sunday schoolwork at Bourne, having served two terms of seven and fourteen years respectively as superintendent. On his retirement, two years ago, he was presented with the Connexional Diploma of Honour, framed, and also a framed photograph of himself.

Adolphus was born on 29 April 1840 at Leeds, Yorkshire, to parents Thomas and Susanna. Thomas was a shoemaker.

Census returns provide the following information about his occupations.

Adolphus died during the third quarter of 1919 at Leeds, Yorkshire.